BSR is a formidable, forward-looking enterprise that has been driving the oil refining industry of Vietnam for over ten years. As we commemorate our tenth anniversary in 2018, this milestone is marked by our renewed commitment towards delivering our promises of efficiency, productivity and the pursuit of production excellence.

Even as we celebrate the past, we enthusiastically look into the future with continued competence, confidence and conviction. By staying firm and loyal to our promises, we are excited to meet the dynamic needs of the market economy of Vietnam, and penetrate deeper into the refined petroleum markets in Vietnam and the ASEAN region. Capitalizing on our unique advantages, we are confident we can achieve further, greater and sustainable success.

Dung Quat Refinery’s technology and equipment are licensed and regularly upgraded by the world’s leading designers and manufacturers such as UOP and Merichem (USA), Jacob (Netherland), Axens (France), and MCI (Japan). The refinery’s management system is compliant with the current leading standards in the petrochemical field including ISO 9001:2015, ISO 14001:2015 and OHSAS 18001:2007.

Dung Quat Refinery has played a pioneering role in building the foundation for the development of the Vietnamese petrochemical industry. The refinery aims to be a leading driver in the formation of the country’s major petrochemical cluster.

BSR has formulated a strategy reaching beyond the year 2025. This is an important endeavor to fully develop the company. In this strategy, the vision of the company is “Being a leading corporation in ASEAN’s refining & petrochemical industry.” This vision provides guidelines and dimensions for all missions, strategies and other strategic issues.

This is the most important mission of BSR. It is committed to meet the oil production demands of all Vietnamese industries. This will help to minimize the negative impact of global oil fluctuations on Vietnam. BSR will invest more to enhance its processing and production capacity, apply advanced technology, and improve operational and management methodologies to accomplish this mission.

In Central Vietnam, BSR has made great contributions to the regional economic and social development by contributing to the local government budget, attracting more investment from other related industries, creating more employment, and increasing the income of the local population.

Two of the most important values of the company are the brand name of Dung Quat Refinery’s products and BSR’s prestige in the market. The company continues to apply great effort to conserve and enhance these values. These are also important factors contributing to investors confidence.

Improving employee satisfaction is a significant priority of BSR. The basic and important needs of people working at the company will be identified and met by the company. This is also a necessary solution to motivate employees and maintain their loyalty to BSR.

The company has been making considerable positive contributions to support the development of the local community through useful activities.

BSR is an IDEAL destination for Employees, Customers, and Investors with the following values.

BSR honors commitments and behaves in accordance with the highest ethical standards. We ensure compliance with the principles and regulations in operations and production.

We put the interests of the company above our own, voluntarily devote and sacrifice our time, energy, intellect, and strength to accomplish work to the highest standard, contributing to the growth of the company and the wealth of stakeholders. We work and cooperate with the highest aspirations, passion, and enthusiasm.

Continuous learning is a critical success factor for the sustained progress of the company and for all employees.

We voluntarily and willingly pursue the BSR vision and mission with the foremost confidence and devotion. BSR ensures all tasks are accomplished to the highest standards and and in a manner that supports the interests of all stakeholders. We always have solutions in every situation.

We continuously enhance the value of BSR to stakeholders and realize the company’s vision and missions through this solidarity. All employees put their trust in the direction of the Board to motivate, inspire, and support one another for progress and development.

BSR believes the total customer satisfaction is one of the fundamentals of business success. BSR always conducts every business activity based on the faithfulness and active listening and value co-creation with stakeholders in all corporate endeavors.

BSR believes that human capital is the focus of management. Every success depends on people. We also have a strong belief that the highest performance can be attained through the maximization of initiative, willingness, and brainpower of each member of BSR.

As a leading economic force in the oil refining industry of Vietnam, BSR continues to be a success story of business enterprise management.  The management of BSR is committed to building upon the company’s advantages and propelling the company forward with strategic thinking and clarity, new investment and expansion plans, under the guidance of an established team of competent technical and managerial talents.

BSR has a long-established history with several turning points and achievements in different stages as follows:

In this period, the government continued searching for joint venture partners to proceed with Oil Refinery No.1 in Dung Quat, Quang Ngai Region.

Facing difficulties in the Tuy Ha petrochemical refinery project, the government made more efforts in preparing for the construction project of Oil Refinery No.1. Several feasible locations along the Vietnam coast were explored and investigated so that the best one for refinery construction would be found.

Under the Prime Minister’s Decision No. 658/QD-TTg on the location for Oil Refinery No.1 as well as on the planning of key economic region in Central Vietnam, Dung Quat – Quang Ngai Province was selected as the official location for the Refinery. Several foreign investors such as LG (Korea), Stone & Webster (US), Petronas (Malaysia), Conoco (US), etc. were also involved in the Project. However, they subsequently withdrew from the Oil Refinery Project. 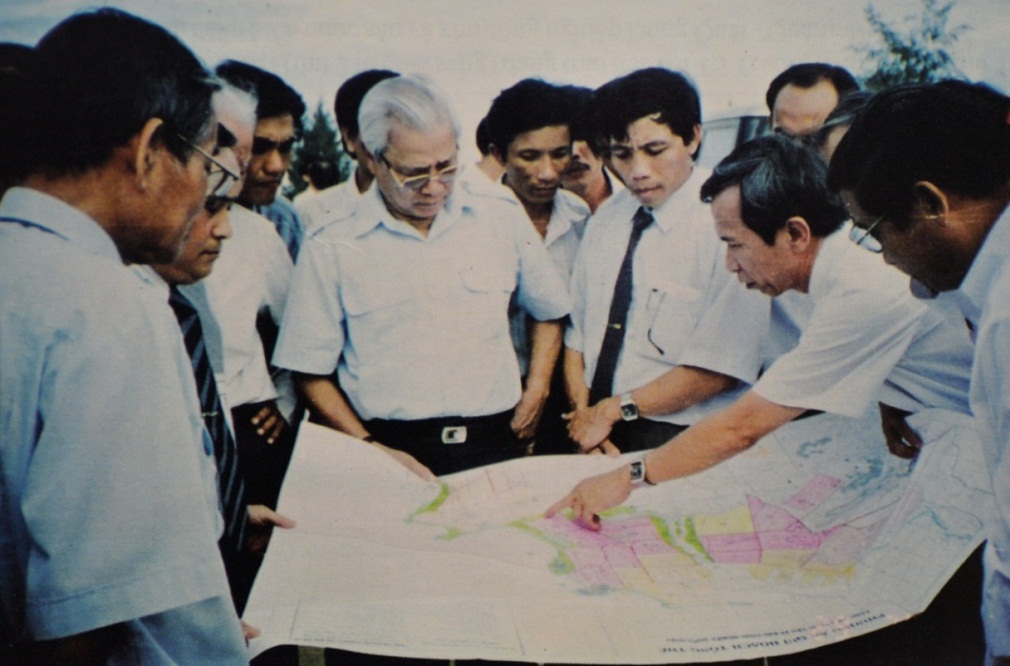 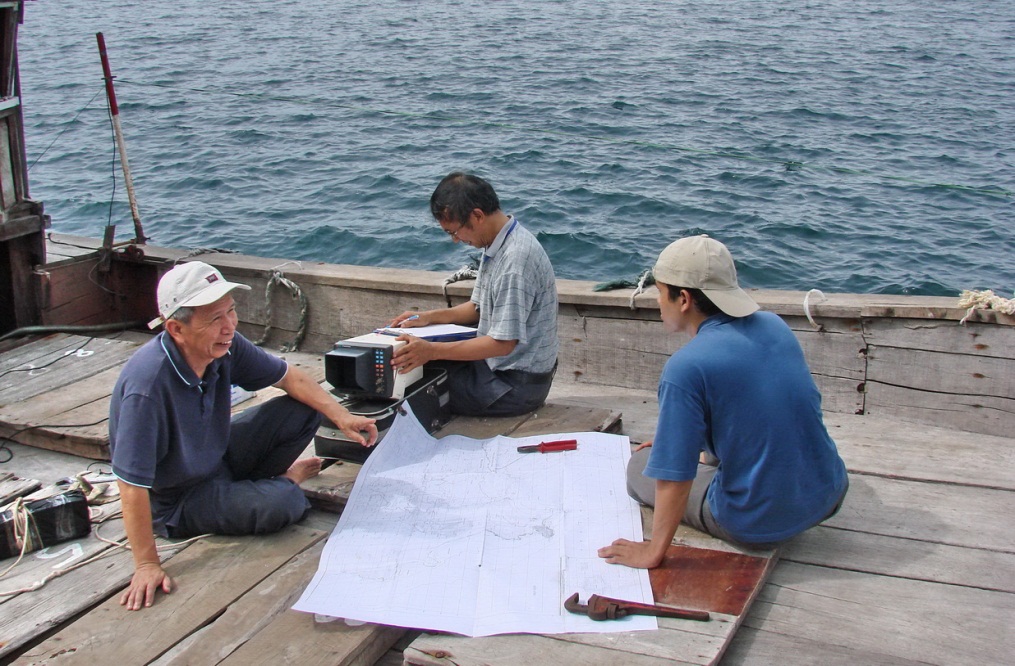 Dr. Truong Dinh Hien and his colleagues researched at Dung Quat Bay in Quang Ngai to find a site for the first refinery 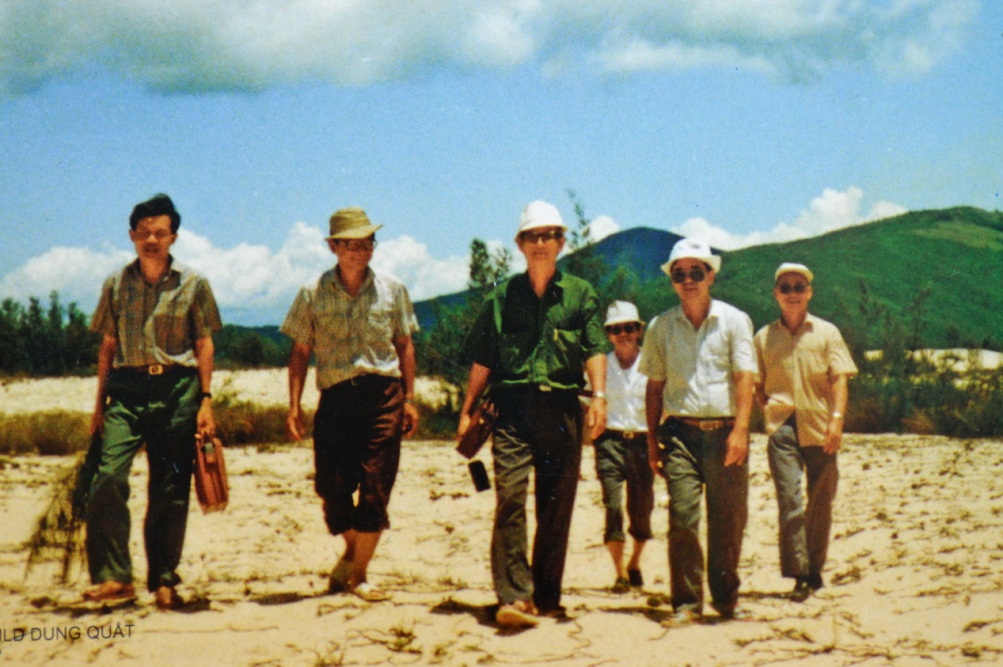 The project was carried out step by step under Decision No. 514/QD-TTg by Vietnamese Prime Minister.

After the withdrawal of the foreign partners, in accordance with the state leadership, Vietnam Oil and Gas Group continued to prove the feasibility of the detailed plan of Oil Refinery No. 1 with the total investment amount of Vietnam. The plan was carried out from January 1997 to the end of March 1997 with the participation of Ministry of Planning and Investment, Ministry of Communications and Transport, Ministry of Finance, Ministry of Science, Technology, Ministry of National Defense, Ministry of Industry, Office of the Government, and Quang Ngai Province People’s Committee. 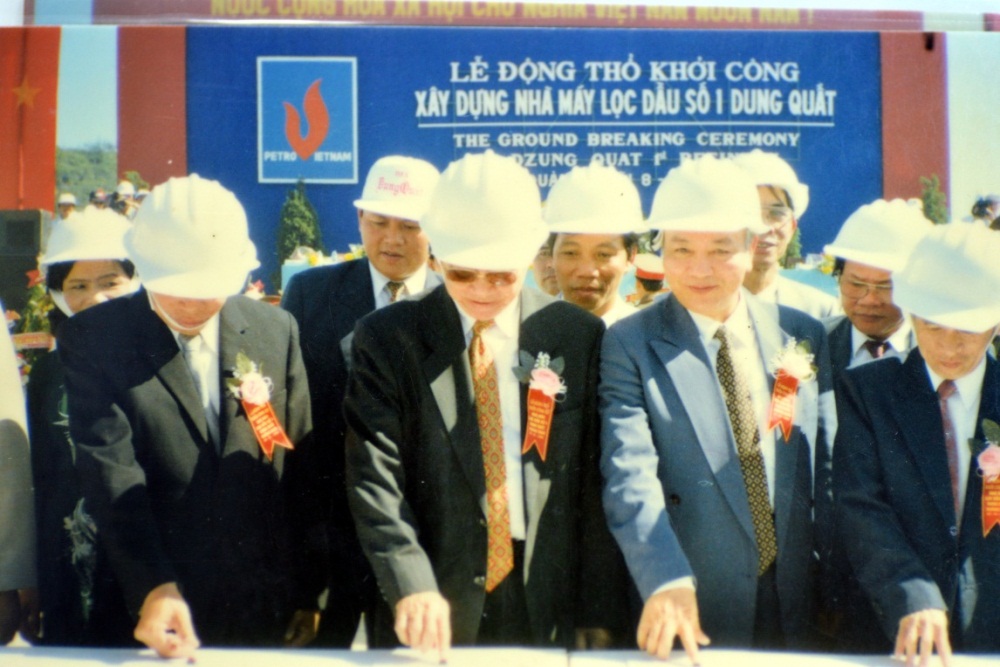 Groundbreaking Ceremony of Refinery No.1

On 10th July 1997, under Decision No. 514/QD-TTg by Vietnamese Prime Minister, Oil Refinery No.1 project, with the total investment of $1.5 billion and processing capacity of 6.5 million tons crude oil annually, continued as a solo project of PetroVietnam. The ground-breaking ceremony for Oil Refinery No.1 was held in Quang Ngai Province, Vietnam.

The Governments of both sides signed the intergovernmental Agreement dated 25th August 1998 on the construction and operation of Oil Refinery No.1 in Dung Quat. According to the agreement, the governments agreed that Petrovietnam and Russian Petroleum group -Zarubezhneft would be major investors of the projects.

Vietnamese-Russian Joint Venture Vietross Refinery was officially established on 28th December 1998 under Investment License No. 2097/GP-KHDT by Planning and Investment Ministry of Vietnam. 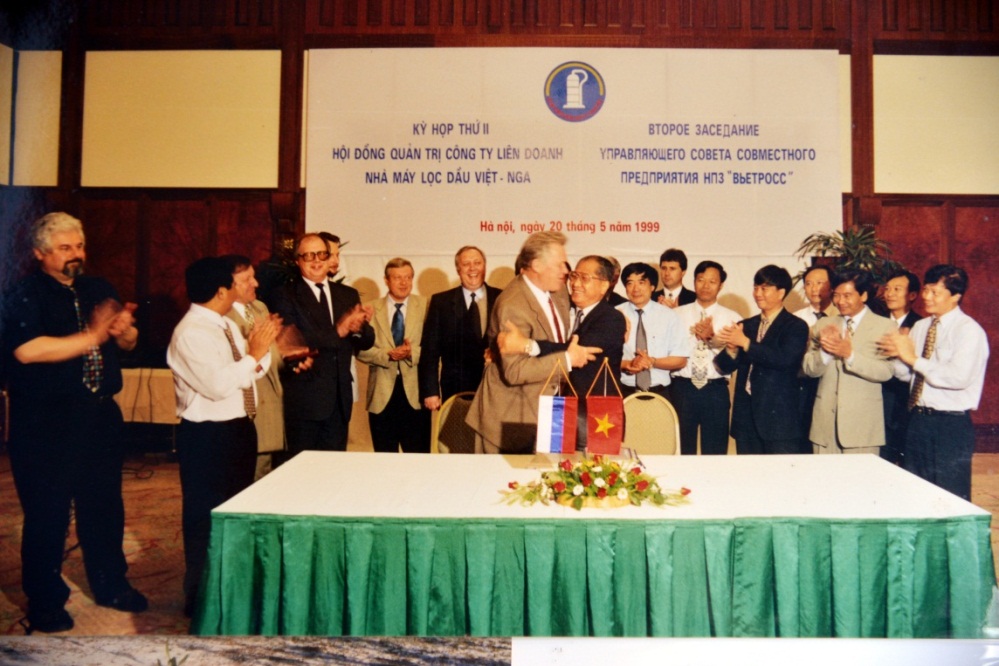 According to the government’s Decision No. 560/CP-DK dated 21st June 2001, the total investment for the project was USD 1.297 billion excluding finance costs. Taking part in a joint venture with Russia helped to solve two main problems including raising fund and having an experienced expert team to carry out the project. 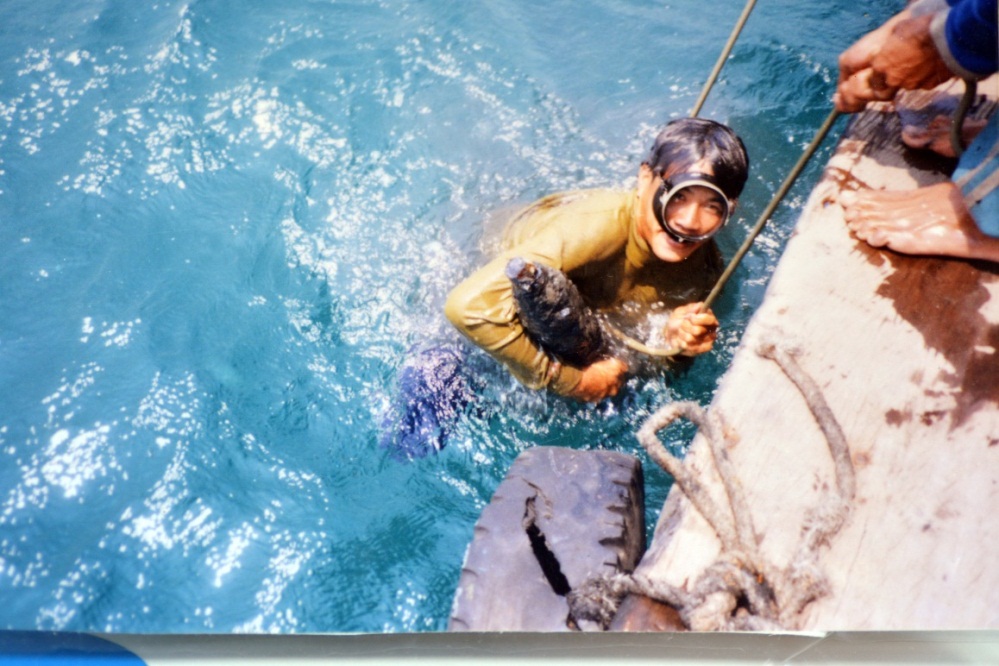 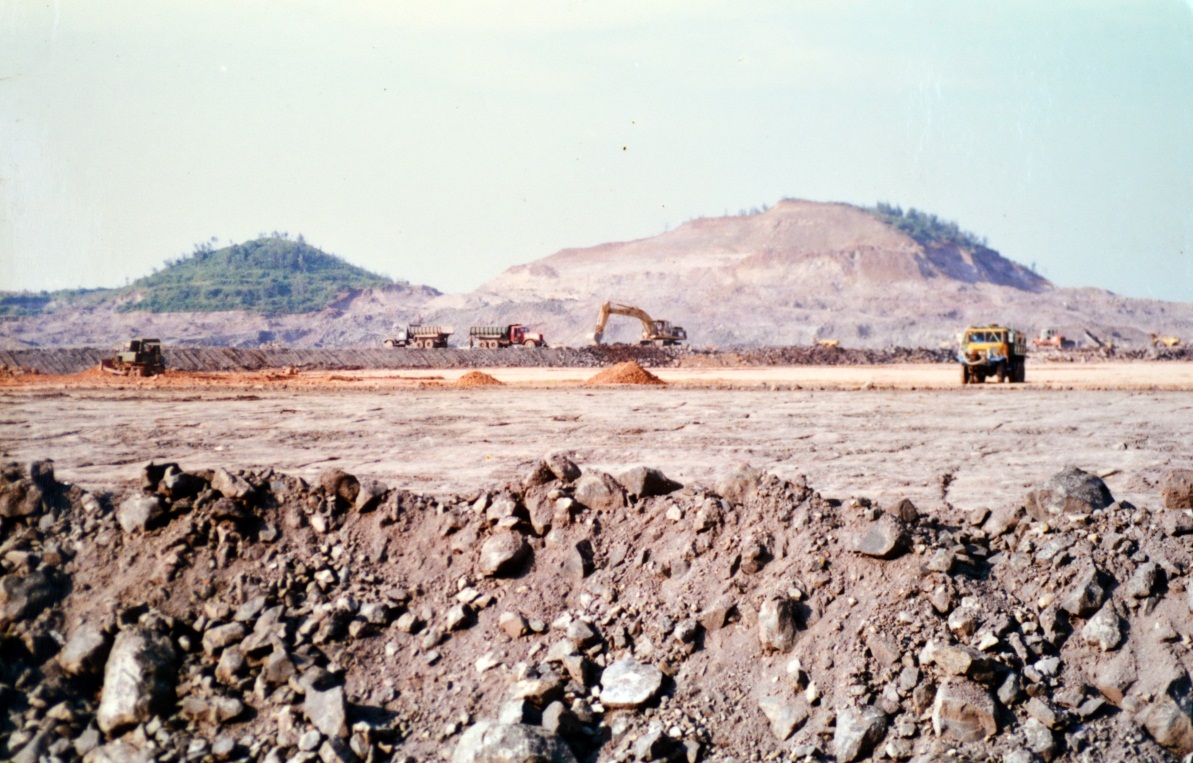 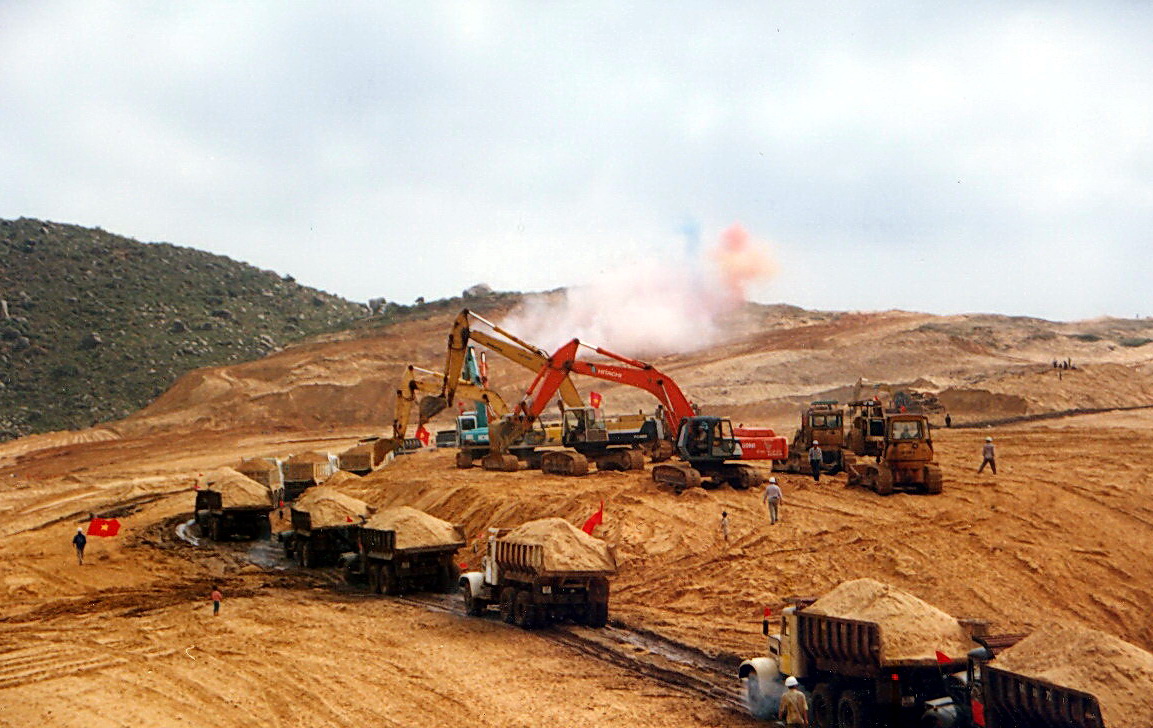 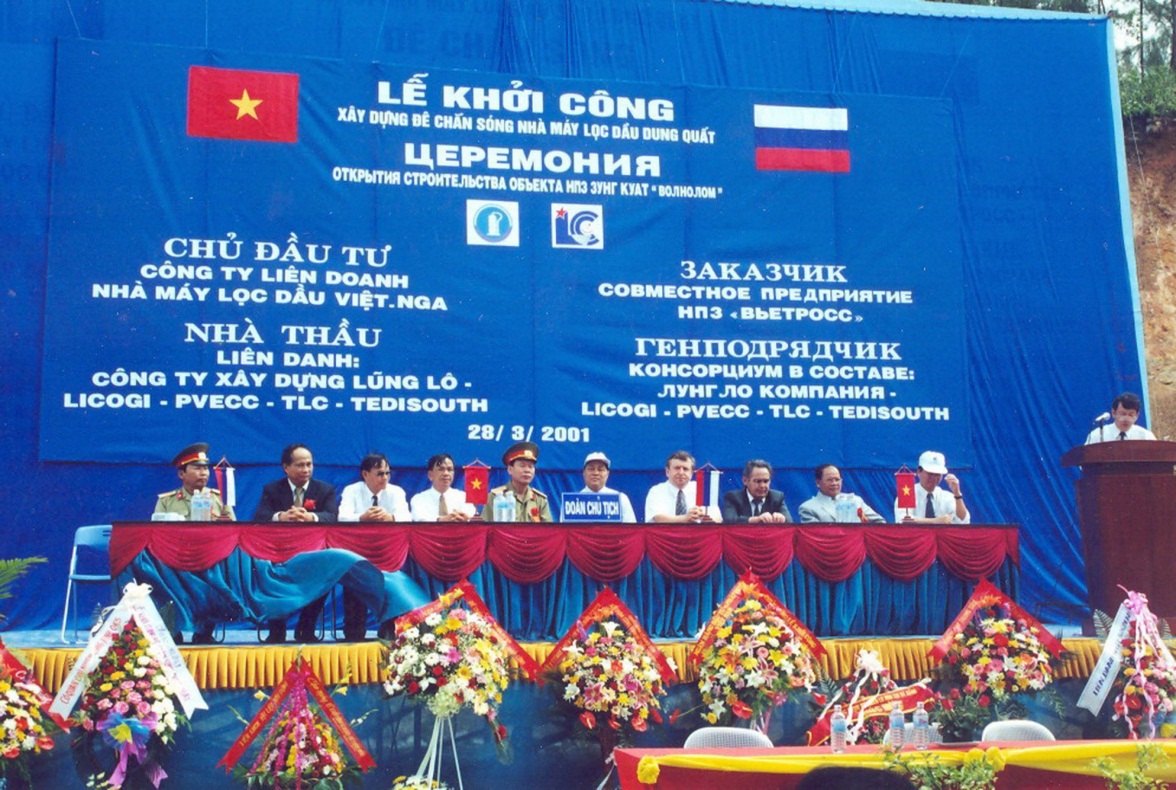 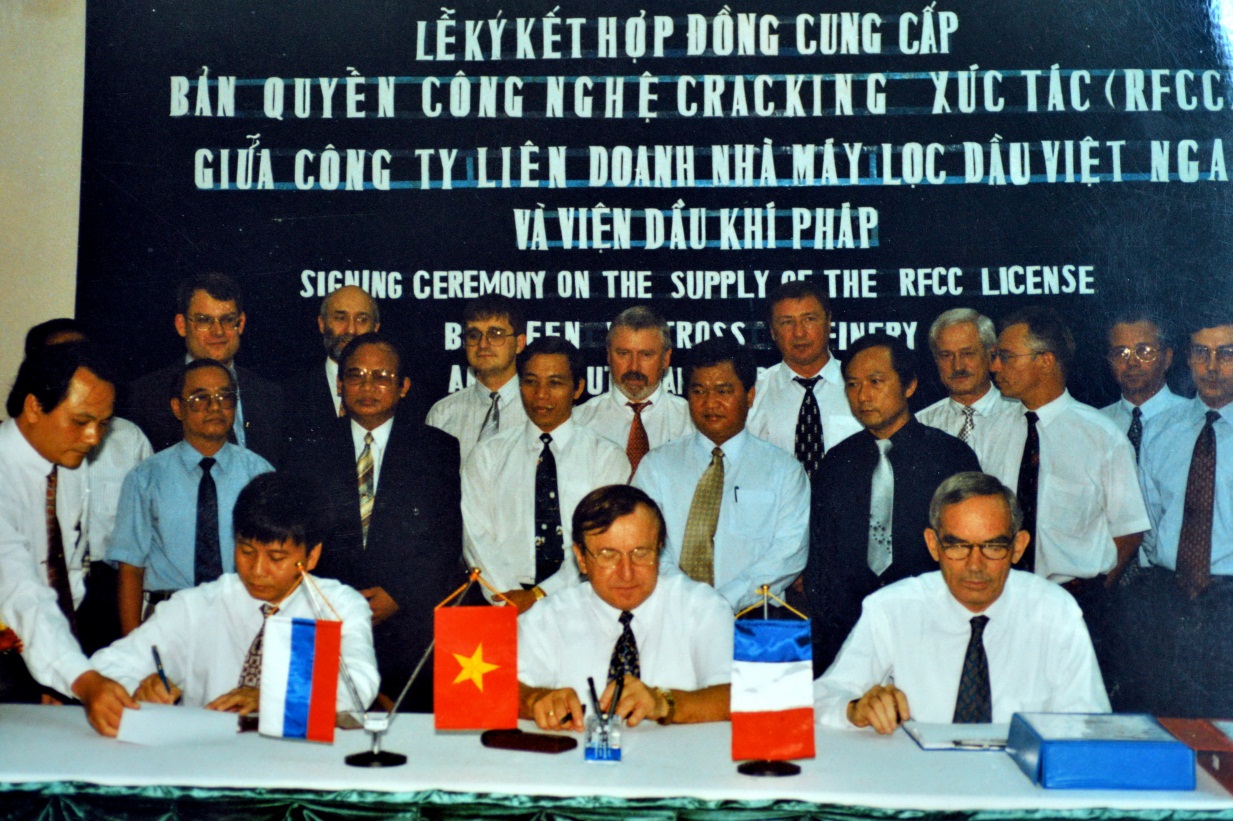 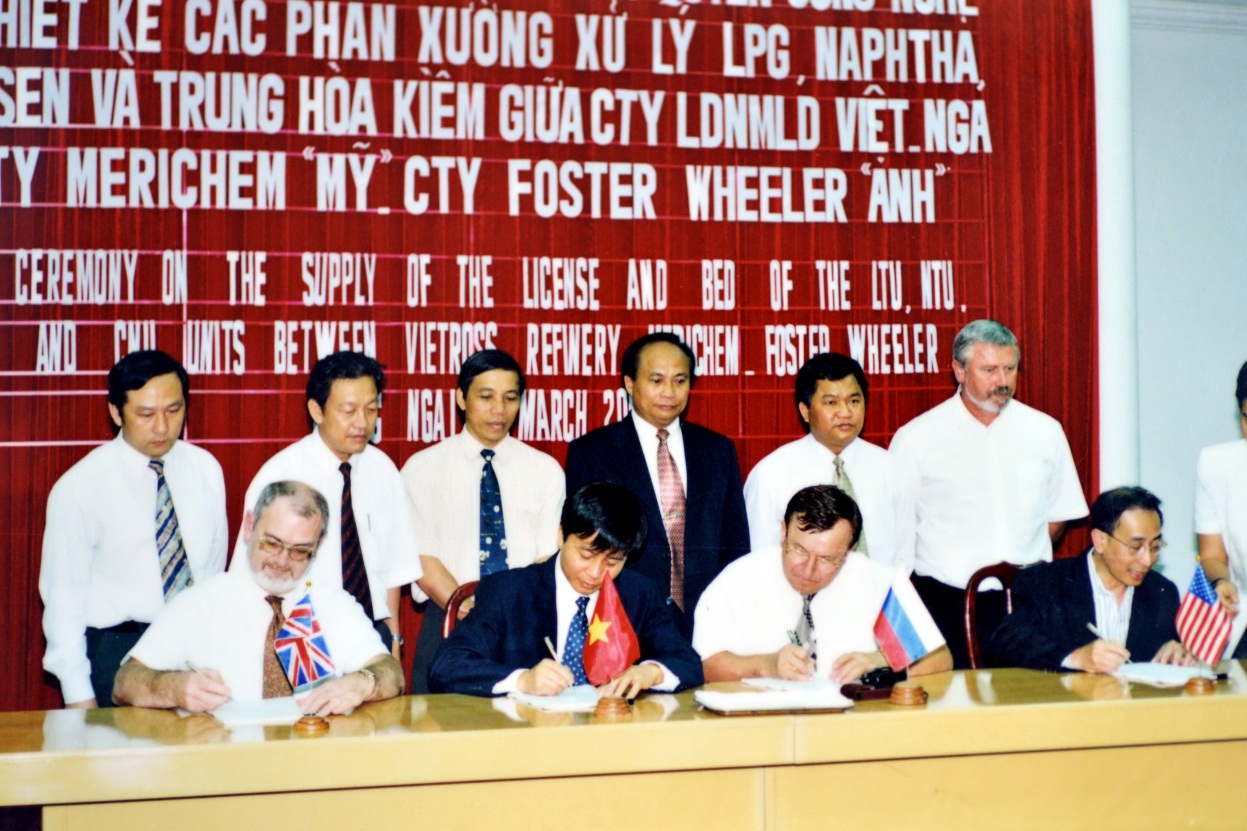 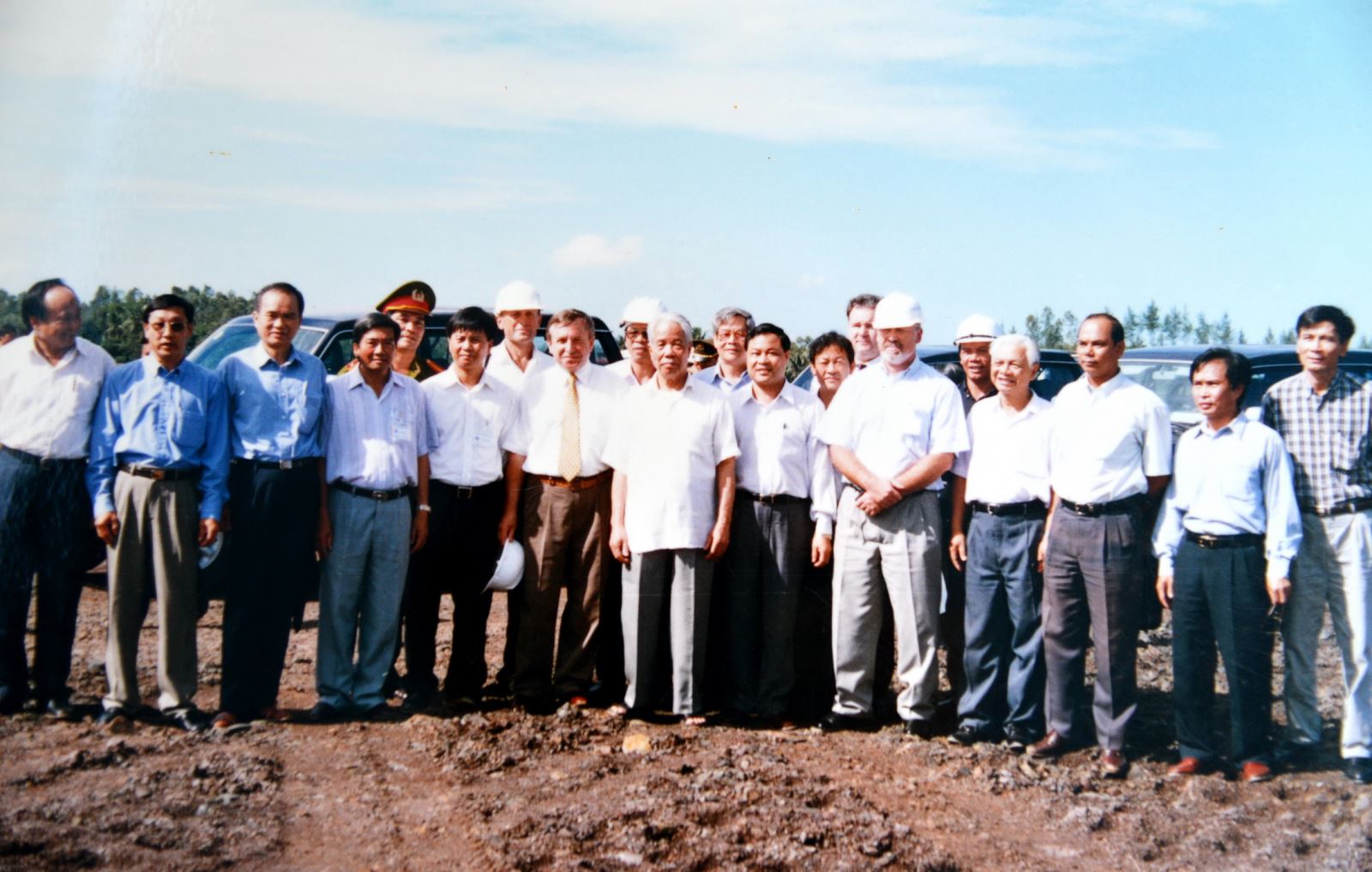 In this period, the Dung Quat Oil Refinery Project was in the course of construction under Decision No. 546/QD-TTg issued by Prime Minister.

After the withdrawal of Russia, the Vietnamese Government allowed Vietnam Oil and Gas Group to continue the construction process of Dung Quat Oil Refinery Project based on State Decision No. 514/QD-TTg dated 10th July 1997. On 12th February 2003, Petrovietnam established the project management of Dung Quat Oil Refinery to implement the construction of the project with the full investment of Vietnam. 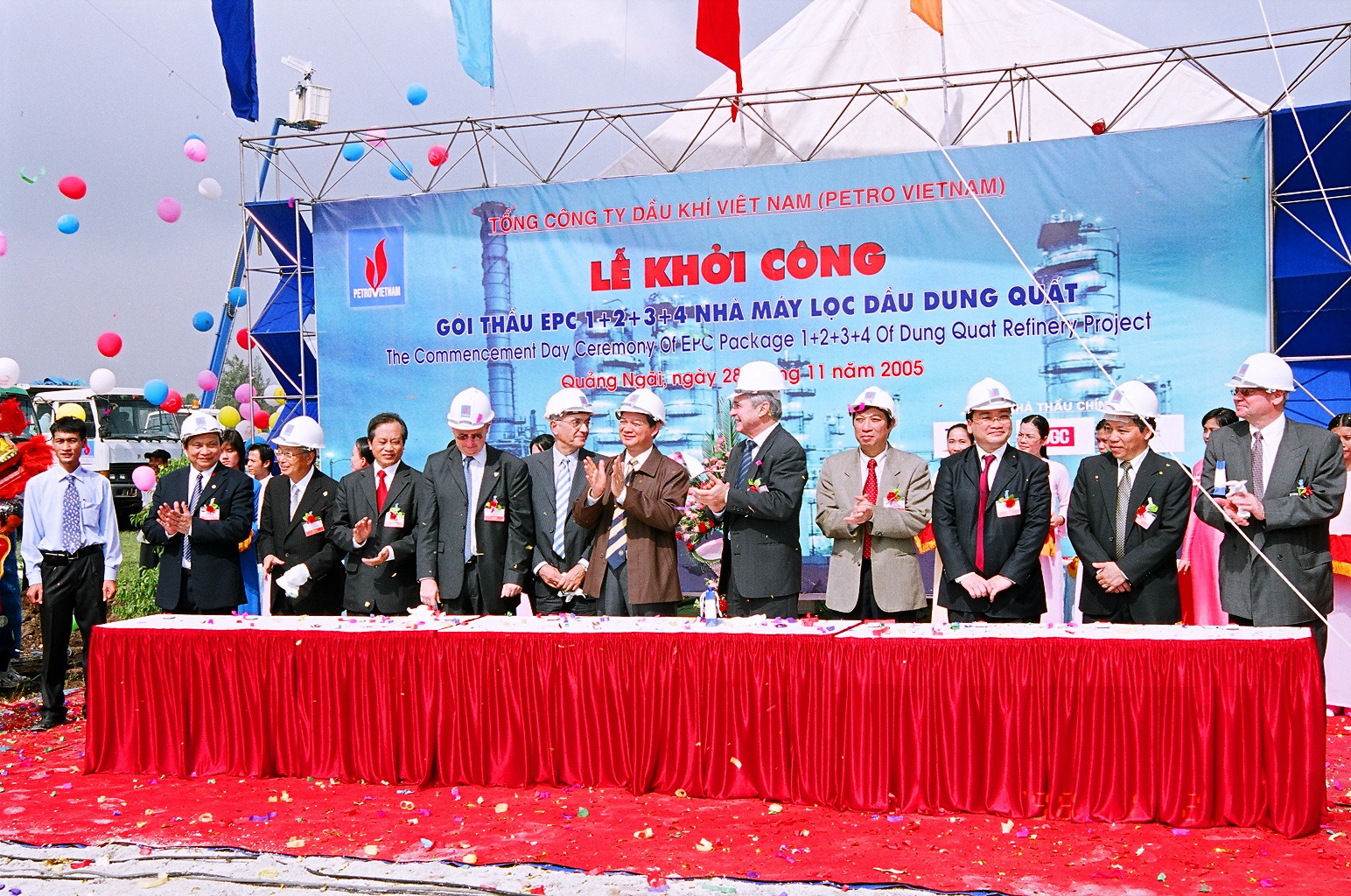 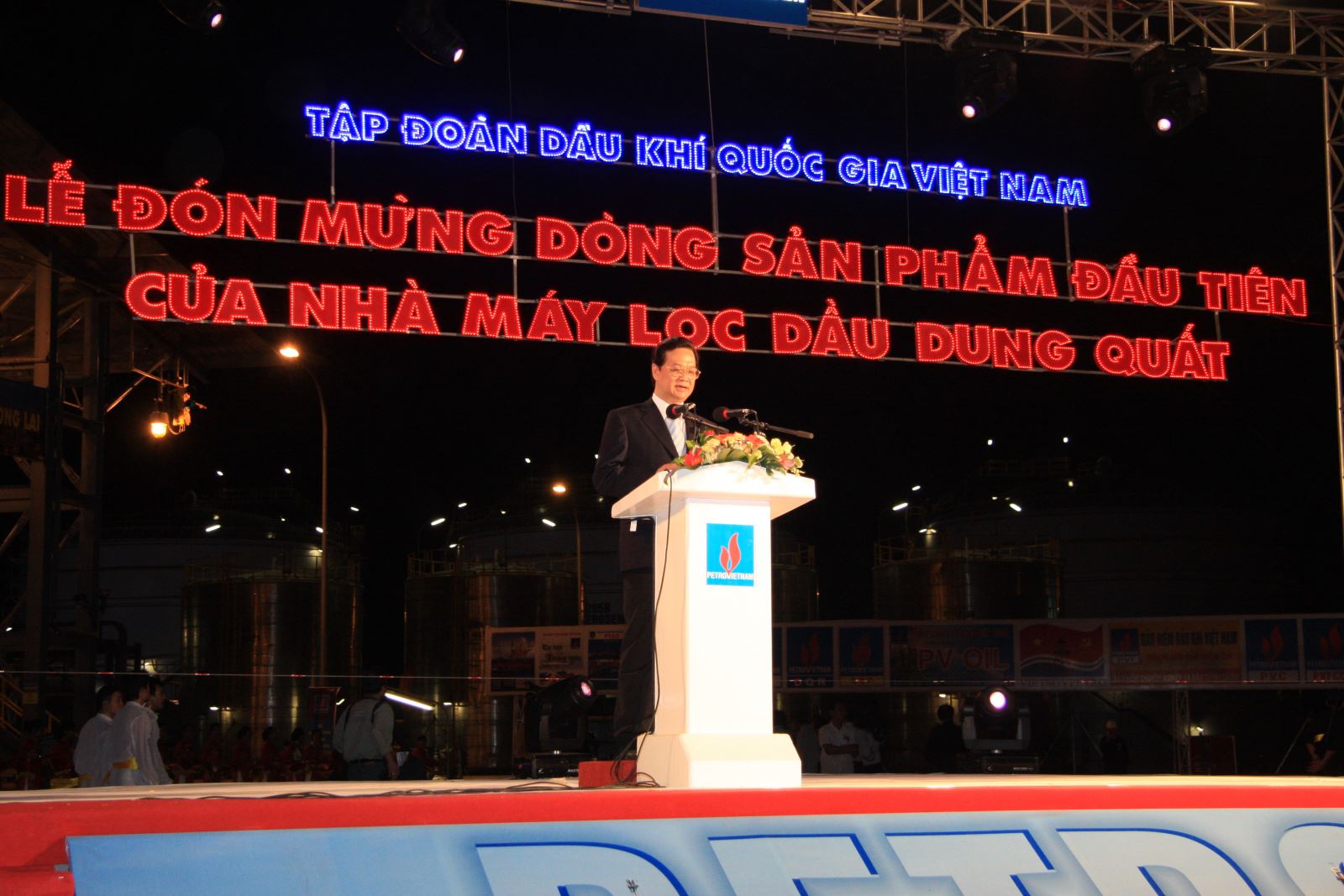 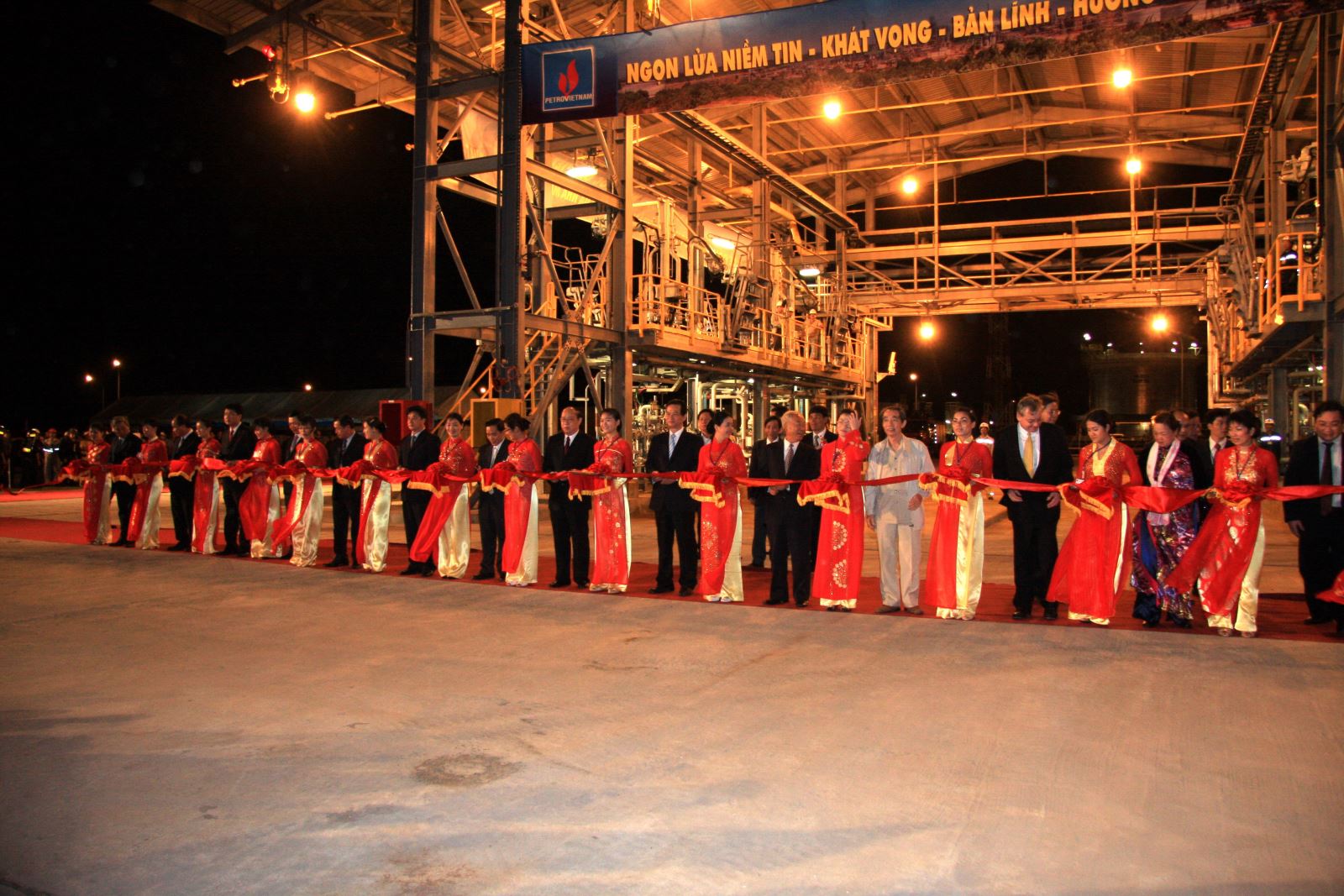 The project was the national key project in the oil and gas field, which was critical for the socio-economic development of the nation. The investment in the construction of Dung Quat Oil Refinery allowed Vietnam to process crude oil locally to gradually ensure energy security, reduce dependence on foreign petroleum supply and create a new appearance for the regional development of the Central area, especially Quang Ngai Province. Moreover, the project marked the turning point for national oil and gas industry, laid the foundation for the key industrial sector of the nation, solved the problem of unemployment effectively and made an important shift in the economy. 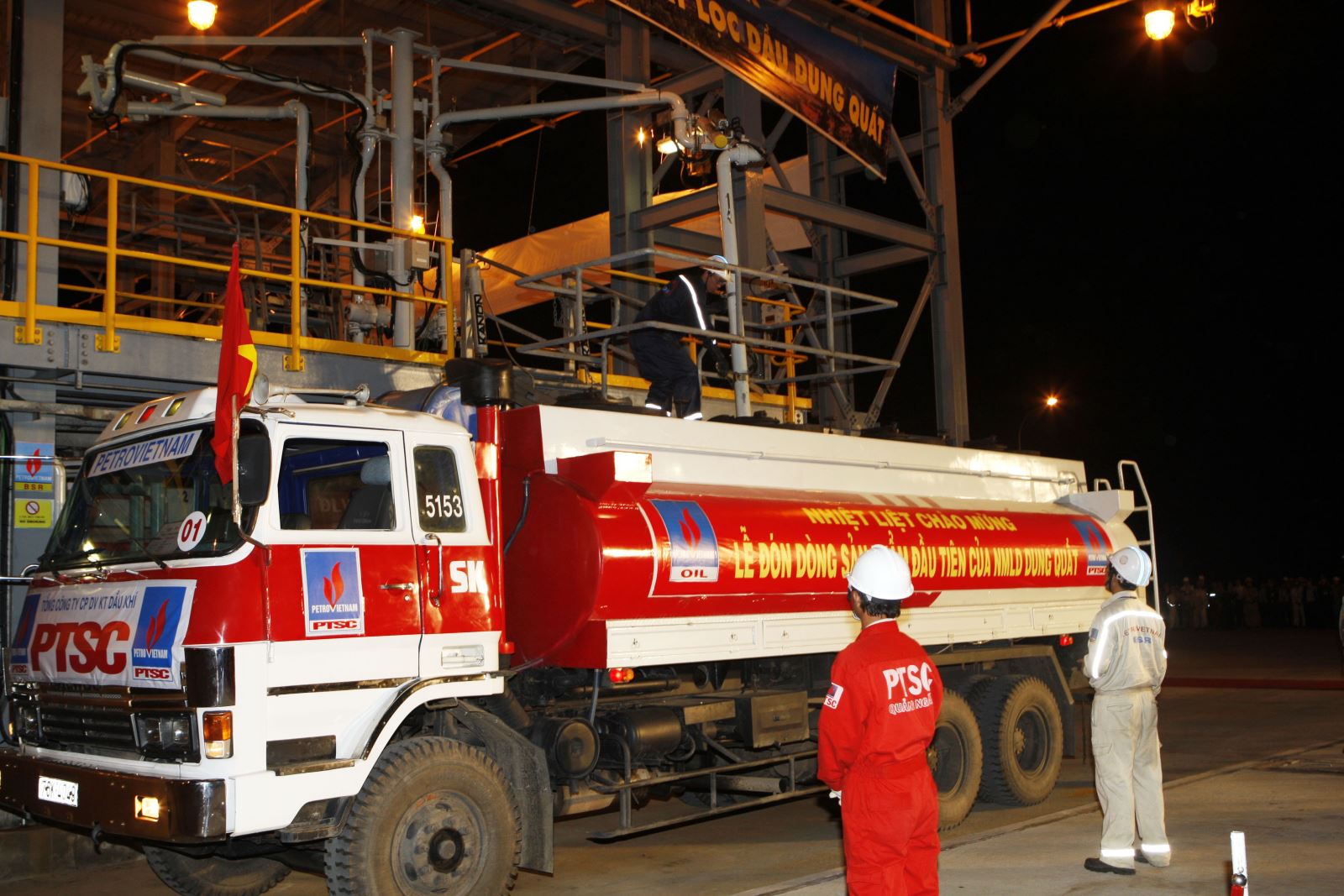 From 22nd February 2009 to the end of December 2010, BSR genarated 8.3 million tons of crude oil, processed and provided the market with 7.2 million tons of various products. In 2010, BSR gained revenue of about VND58,000 billion, with the profit of above VND119.11 billion and payable of over VND10,000 billion to the state budget. 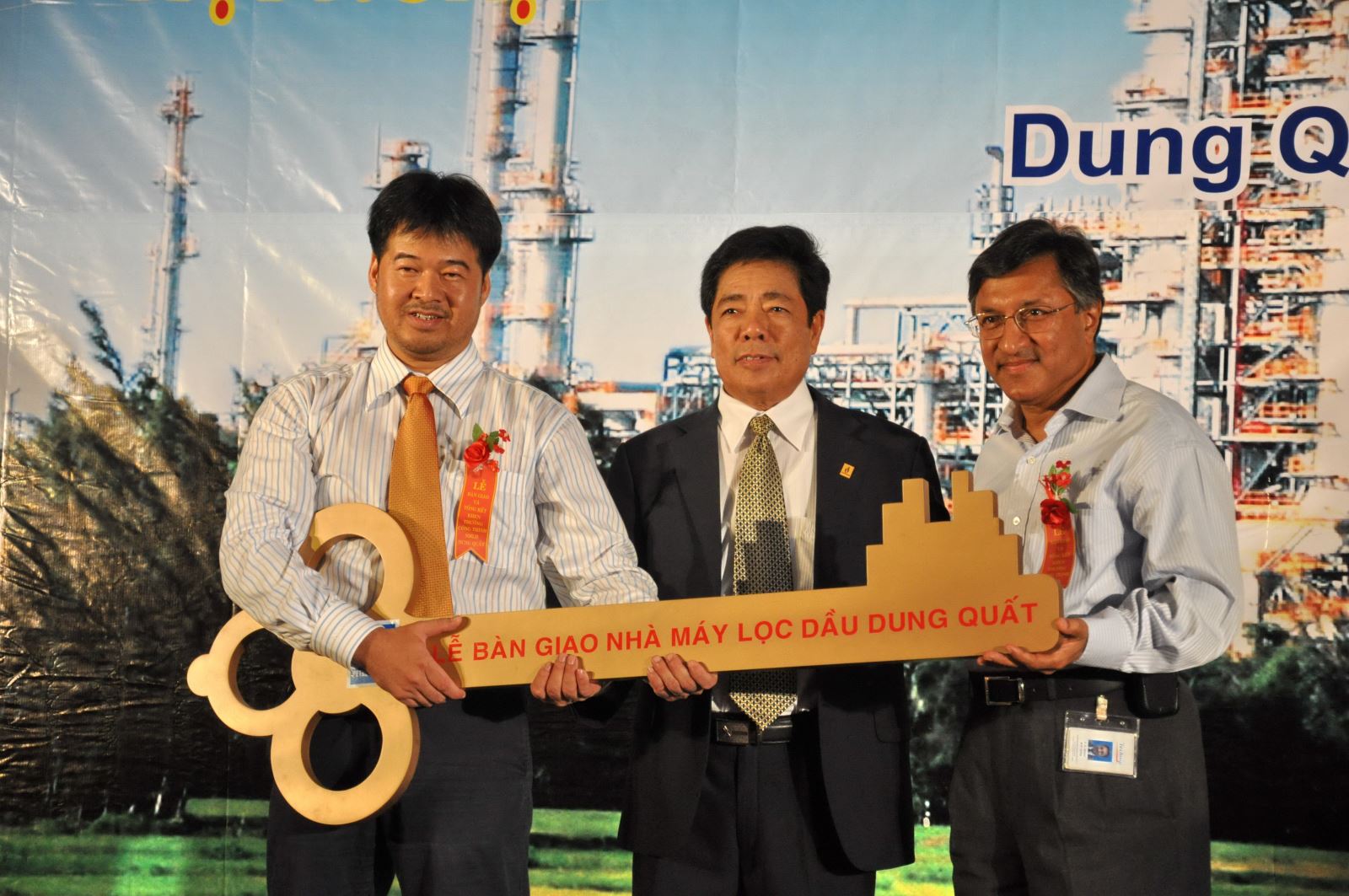 Dung Quat Oil Refinery has been in operation and gradually grows stronger.

On 6th January 2011, Dung Quat Oil Refinery was officially put into operation and inaugurated by the Prime Minister. Since BSR took over the Refinery, its average capacity has always been over 95% and after its first successful maintenance, the Refinery has always operated at 100% capacity.

In 2012, the operation of the company experienced a lot of difficulties because of 68 days-off for maintenance shut downs. However, in 2013, the company exceeded the set targets, imported 7.3 million tons crude oil (compared with planned figure of 6.5 million), produced and sold out 6.6 million tons of various products with the total revenue of over VND15,000 billion, and with payable of over VND28,000 to the state budget.

By 2014, the Refinery had operated 630 days without any problem before undergoing the second maintenance shut down. From 2011 to 2016, the yield of this period was about 37 million tons with the revenue of over VND 693,000 billion, and payable of VND 118,000 million to the state budget.

Dung Quat Oil Refinery has played an important role in ensuring the national energy security, shifting domestic economic structure and enhancing other industries. The company completed the state plan 52 days before the deadline for 2016. Accordingly, the company produced 6.83 million tons of products, exceeding the given target by 1 million tons in the same year. The development goals set up by Petrovietnam for BSR to achieve in the next period is very ambitious. BSR will become an active, competitive and environmentally-friendly petrochemical refinery company both locally and internationally.

With the efforts and determination of its staff, workers as well as the competent management of its leaders, Binh Son Refining and Petrochemical Joint Stock Company (BSR) has made enormous efforts to overcome its difficulties, challenges; to boost its production and business. This has led to the company’s continued excellent progress and sustainable development. Thanks to its contribution over the past few years, the company has been continuously awarded titles, certificates of merit by the nation, the government, central ministries and industries, Quang Ngai Province People’s Committee, local and foreign organizations, as follows: